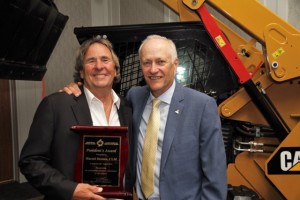 Tuesday No Comments By hank_admin General

August 17, 2016, Kelowna, BC – Long-time industry veteran and volunteer, Harold Deenen, CLM, has won the 2016 CNLA President’s Award for his outstanding commitment to the industry and association.  CEO of Hank Deenen Landscaping, Harold is also a Past President of CNLA, Treasurer for the Canadian Agriculture Human Resource Council, and current CNLA Human Resources Chair. Passionate about horticulture and the impact green has on our future, Harold Deenen has devoted countless hours of volunteer work in this field. This stemmed from the belief you should invest time where your heart lies. The industry has recognized his efforts over the years by presenting him with both the Frank Ewald Junior Landscape Award for outstanding leadership to the horticultural industry and Honorary Life Membership in Landscape Ontario Horticultural Trades Association. His enthusiasm has grown from an unstoppable belief in his profession and for those who work in it. As CEO of Hank Deenen Landscaping Ltd. Harold brings his zeal for professional excellence and the environment to a corporate level. Originally founded by his father over 60 years ago, the company has grown to become an industry leader by emphasizing training, education and a healthy respect for the environment. The company won the first ever Environment Award presented by Landscape Ontario in 2000. Harold’s professional credentials include Landscape Industry Certified Manager (the first CLM in Canada), Landscape Architect (OALA), Landscape Technologist (HLT) and Horticulturist/Landscaper/Greenskeeper (C of Q). On a more personal note, Harold is equally comfortable above and below the water’s surface. While he is happiest boating on board “Wreckless”, he is also a private pilot and scuba dive instructor. He firmly believes that “balance of life” is an essential ingredient to happiness and success. He and his wife Linda, have two children and two grandchildren